Why a World Water Day? 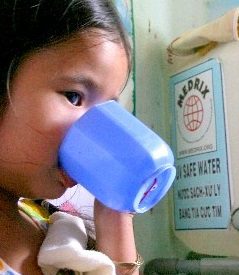 World Water Day is an international observance and an opportunity to learn more about water related issues, be inspired to tell others and take action to make a difference. World Water Day dates back to the 1992 United Nations Conference on Environment and Development where an international observance for water was recommended. The United Nations General Assembly responded by designating 22 March 1993 as the first World Water Day. It has been held annually since then. MEDRIX is raising awareness about the need for safe water and the impact that our safe water and sanitation projects have made in Vietnam to date. We hope that our supporters will put World Water Day on their calendars on March 22nd and consider making a special donation to MEDRIX to increase access in rural Vietnam to a truly life-saving gift: safe water.

How it all got started in Vietnam:

MEDRIX made the decision to pursue safe water development in Vietnam after realizing that unsafe water and inadequate sterilization methods were two of the biggest causes of childhood illnesses in both cities and villages alike.

Up to 80% of the burden of diseases in Vietnam can be related to contaminated water, and leaves young children especially vulnerable. The magnitude of the problem pushed MEDRIX towards finding a solution.

Water is considered “safe” after three things have been removed: debris, organisms, and chemicals. While boiling may inactivate some of the harmful organisms, it does nothing to eliminate the debris or chemicals. As we learned more about the traditional treatment methods being practiced, our focus soon became two-pronged: develop an affordable, effective and sustainable treatment system; and educate the local people on what truly makes water “safe” to drink. 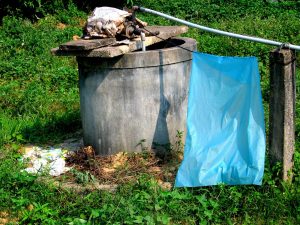 MEDRIX witnessed contaminated and unprotected wells all over Vietnam in the 1990s, spurring volunteers into action.

In the late 1990s, our focus was on increasing access to water. We partnered with local organizations and helped provide funding to dig or drill wells for schools and clinics. However, it soon became clear that access to water was not the primary problem; our focus needed to be on water quality, not water quantity. Families in both cities and villages had access to water, but it still contained the harmful chemicals and microorganisms that were causing illnesses. A treatment system needed to be developed to ensure the safety of drinking water.

Since MEDRIX began this project in the 1990s, accessibility to water treatment systems has grown. Today, industrial grade products can easily be purchased in Vietnam and maintained by local vendors and health officials. MEDRIX partners with the local Vietnamese health department to address their water challenges instead of attempting to solve the problem and operating as an independent outside organization. This partnership and empowerment has led to increased support from local officials and residents alike, and ensures project sustainability which is managed at the local level in Thừa Thiên–Huế Province.

But not without education 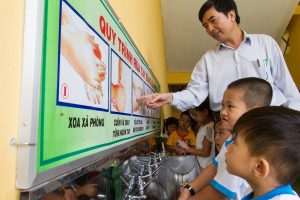 Preschoolers learn to wash their hands and use soap, many for the first time, 2012.

The education and workshops we provide address proper hygiene and sanitation techniques including hand washing, the dangers of unsafe water, the importance of properly treating water, and how to operate the sanitation systems. The objective of our education portion of this project is to eventually reduce morbidity and mortality as a result of unsafe water consumption and gastro-intestinal illnesses. These hit children under the age of 5 years old and the elderly especially hard, as their immune systems are not well equipped to fight severe diarrhea or similar illnesses.

Since transferring more responsibilities for education, water testing, and system management to our Vietnamese partners, MEDRIX still remains active and involved with the water challenges faced by rural communities by working closely together and continuing to provide funding and education to increase access to a safe, sustainable and life-giving resource: safe water.

MEDRIX and Vietnam have come a long way since making the decision to address the challenge of providing safe drinking water in rural schools. While there were numerous roadblocks along the way, together we were able to learn and adapt accordingly. In the projects we have completed, MEDRIX and our partners have not only provided safe water to thousands who needed it, we have empowered local Vietnamese people to continue the work towards the goal of safe water for all.